Onomatopoeia, also known as the Outlands is a large isolated island that is almost uninhabited. It has the same cultures as the temperate rainforest (in the east) and Malibu, California (in the northeast), and the forests of Alaska and the Hebrides (all over the west). The east Onomatopoeia is also inhabited by insane people of the towns and crazed modern and prehistoric animals, dinosaurs, and pterosaurs. 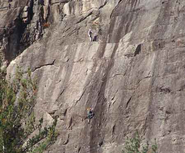 Map of Onomatopoeia
Add a photo to this gallery
Retrieved from "https://a101.fandom.com/wiki/Onomatopoeia_(island)?oldid=6062"
Community content is available under CC-BY-SA unless otherwise noted.